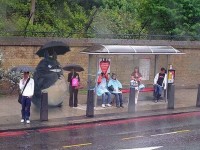 I went home the other night from a career workshop with my head in the clouds as I’m always thinking about something whether consciously or subconsciously and stopped by the grocery store. I grabbed a few things by list-guessing as to have a list near me is like trying to eat a snack in front of my kids, its gets lost faster then you can realize its missing.

As I stood in a slightly longer line behind this elderly man who had a positive air about him, I zoned out mentally as my head went back to not only thinking of what I could be missing in my basket, but brainstorming about what I sponged-up from the workshop. I was thinking to myself, how am I going to stand up the next day before everyone and not look like a blank case just as the old man in front of me had half-finished loading his groceries onto the conveyer belt. He turned around to me and pointed out the shorter express line to the side, as he seemingly felt bad that I had about 5 things on me and was waiting on his whole carts of stuffs. I came back to the present and immediately assured him that it was fine, that I was just buying time in the store trying to remember what was on my list (not mentioning that my grocery list was no more than my 6 y/o’s memory who was in school still) and to take his time. And then he replied to me with something that ultimately hit me like a board to the face. He turned back around as his groceries moved down the belt and said, “Oh, for a moment there I thought you were angry and about to burst into a fit at me.”

I was looking rather dumbfounded at that point as I consider myself a positive person and was in a good mood and here this elderly man was scared witless of me like I was going to strike him dead with my box of cereal for having more groceries, while my daydreaming head wasn’t even the least bit interested in him, let alone the space now available on the conveyor belt. But we both laughed it out and restored the positive air between each other and he left. When I came out of the store he was loading his car still and I smiled and wished him a good day, fearing he might see me still as some impatient, inconsiderate, evil, granola-bar wielding mother lost in another world still, and went home.
Hence the heroine survives yet another encounter at the dreaded grocery store and reaches home to raid the sweet loot in secrecy. Now if only I can figure out where my Muse took off to, I’ll be set.
Hopefully it’s not in the ice cream section still…